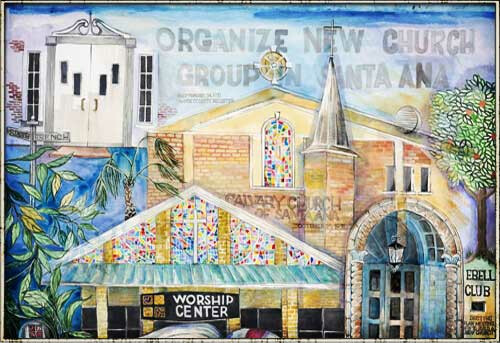 Calvary Church began to take shape in 1930 as a small Wednesday night Bible Study in Orange County with a group of Christians who were seeking a church that would remain true to the Bible. The group reached out to Dr. Charles Fuller of Calvary Church of Placentia who agreed to help get this new church started and write the original statement of beliefs.

Calvary Church of Santa Ana had its first service on Sunday, September 20, 1931, in the Ebell Club on French Street. The church was officially chartered as an independent branch of Calvary Church of Placentia on October 25, 1931 with 203 members. The church’s original purpose statement under the leadership of the first Senior Pastor Frank E. Lindgren was:“Our purpose is to honor God, present and exalt Christ, further the missionary effort and be of service to the people of our community.” From the very beginning, Calvary has placed a high priority on reaching the world for Jesus. It was in 1932 that Harold and Dauphine Tuggy became Calvary’s first missionaries with the Orinoco River Mission in Venezuela.

A Sunday morning at the Ebell Club in 1938

In 1939, after 8 years of faithful service, Rev. Lindgren resigned, and Rev. Lyman Wendt became Calvary's second pastor. He was a young man who had graduated recently from Biola College. Under his leadership the church continued to grow and they soon found that they had need for larger facilities.

The church bought three lots just down the street at the corner of 6th and French in 1941. In fact, it is recorded that the building committee met on December 7, 1941 (the day of the attack on Pearl Harbor). Due to war material needs, new construction wasn’t permitted. They prayed and realized that the establishment of military facilities could bring hundreds of service men to church and the Ebell Club was not adequate, so the move was on. In 1942, God would provide for the growing congregation as the architect came up with the idea to turn the existing house on the property half way around. While no new building permits were being given, they were allowing remodels. God provided for the new church in so many miraculous ways as the building was completed.

All of the needed furnishings were purchased from a lodge that was closing down, a godly provision since most items were unavailable in wartime. Even exit signs were a miracle, since final inspection would not pass without them. Seven signs were found in a box from the lodge—the exact number needed. Opening day of the new facility was October 18, 1942 with more than 300 people attending.

Calvary at "The House" on 6th & French in Downtown Santa Ana

WW2 through Vietnam saw an amazing outreach to the local military bases through the service of “Popo” Griset and Senior Pastors Earl Morgan and Michael Samsvick, who would become Calvary’s fourth pastor at the age of 33 in 1956.

Taking one step of faith after another, Calvary continued to grow. In 1957, we moved from downtown out to a field of orange groves on the edge of the city—our current location at 1010 N Tustin Avenue. The first service in Fellowship Hall was on April 29, 1962, with a dedication sermon by Dr. J. Vernon McGee. The sanctuary, now called Samsvick Chapel, was completed in 1967.

Over the next decade, Calvary Church would go on to nearly quadruple its membership, complete four major debt-free building projects, and start Calvary Christian School with six grades in 1975. The school grew in the following years as a preschool and middle school were added. 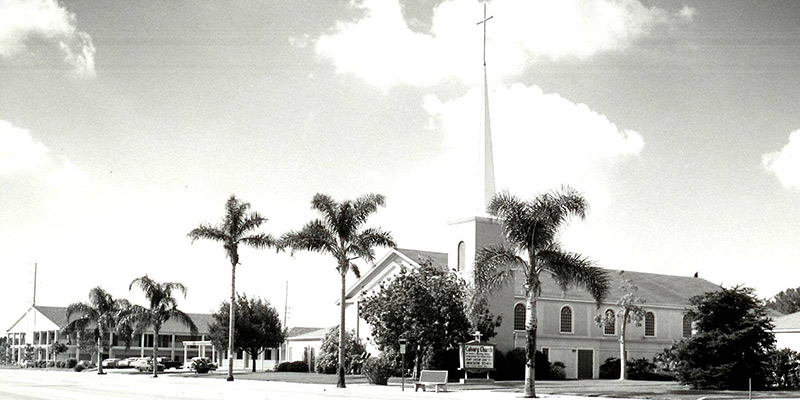 A view of Calvary's growing campus in 1980

Just after Calvary’s 50th Anniversary, Pastor Samsvick suffered a major heart attack while working in his rose garden in April 1982 and passed away after a fruitful 26-year ministry. After an interim ministry by Dr. Lehman Strauss, Dr. David Hocking answered the call to become Calvary's fifth Senior Pastor in 1982.

With further growth and overflowing attendance in the Chapel, Calvary began to build the Worship Center in 1988. It was dedicated to God on November 24, 1991. Pastor Hocking resigned after a moral failure in the fall of 1992. Calvary would then enter a new season, blessed by the arrival of Dr. David Mitchell as Calvary’s sixth Senior Pastor on November 19, 1995. Through his collaborative leadership, Calvary would continue to serve Orange County and reach the world for the next 22 years.

In 2001, Calvary launched the Hispanic Ministry led by Pastor Armando Reyes, offering a Sunday morning service in Spanish. In 2005, Calvary partnered with Logos Bible Church to host a Mandarin speaking service on Sunday mornings as well. Several other ministries were launched during the first decade of the new millennium such as Celebrate Recovery, the Counseling Center, LifeGroups and Alpha.

We have also developed partnerships with local nonprofits in the community and been part of the story of other local churches over the years including The Crossing in Costa Mesa, Living Truth Christian Fellowship in Corona, and Kindred Community Church in Anaheim Hills. Most recently, we helped plant Prodigal Church in Irvine and Iglesia La Puerta in Santa Ana, with ongoing support to both of these unique communities. And we have an active global partnership with our Sister Church, Way of Peace in Albania. Calvary Church has kept its heart for global missions since the first missionaries were sent to Venezuela in 1932. Today, the annual missions budget is currently just over $1,000,000 which supports almost 90 missionary families and many partnership projects around the world.

Our church family’s generosity has recently provided for a major transformation of our campus. From 2010-2017, over $5 million was given, beyond the general ministry and global missions funds, through the faithful participation of so many in the Restoration and Generation Projects. This enabled many needed repairs, the creation of a new Nursery and ministry offices in the Worship Center, a full remodel of historic Samsvick Chapel, and the repurposing of the C Building Basement into The Underground.

On February 4, 2018 we began the next chapter of following Jesus together with a new Senior Pastor, Eric Wakeling. From those original members in 1931 to the thousands that call Calvary home today, God continues to build our family and accomplish His purposes here in Orange County and around the world.  Where will God call us next? And what part will you play in the story God is authoring through Calvary?