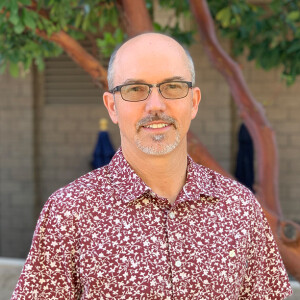 Ross trusted Jesus to be his Savior at age six in Tustin, California at a sweltering Sunday night service in the summer of 1968. After high school graduation, Ross started working at Disneyland and met his beautiful bride Jana while working with the parades. The rest, as they say, is history, and this June they will celebrate their 35th anniversary along with their five wonderful children (ages 15 to 30).

Ross has attended Calvary for nearly 22 years and served previously as an Elder from 2010 to 2015, in addition to various ministries including children/youth, life groups, special events, and most recently served together with Jana as Parent Sponsors and Coaches for middle school small group leaders. Ross retired from Verizon Wireless in 2015 and after 20 years of crunching numbers for Verizon, he started a consulting practice where he continues his work making sense out of data for his clients. Ross’ hobbies include mountain biking, camping & fishing, and spending time with family and friends in the great outdoors.